Wildlife is our passion

“Species like sable and roan have been poached into near extinction. This resulted in only a small amount of these animals being left, as nature works the “closed bloodlines” lead to smaller and weaker animals that struggled to survive. The main focus of breeding is to start bringing the big bodied, strong and healthy animals back to nature in order to get the species to thrive again.” – Wihan Meyer

How it started:
The Meyer family has always been devoted to nature. In 2013 Johan Meyer saw the first sables, at the first Stud Game Breeders Auction the family attended, and instantly fell in love with them. They started with a group of 10 sables and today they are privileged to have close to 200. They later expanded the program to Roan, Springbuck, Golden Kings Wildebeest and Cape Mountain Zebra.

51”+ Prime Time
Prime Time was acquired in 2018 from the well-known Valley Venture Stud. He is one of few 51” pure Zambian bulls. He boasts all the well-known characteristics of a Zambian bull with his huge body, black mask, thick horns and golden legs. Aside from his 51”+ horn length, he also has perfect symmetry making him close to picture perfect.

Aside from his physical appearance he also has an impressive genetic backing that outperforms more than 99% of bulls in the country. He was sired by 49” Tequila from the famous Madala line. Tequila is an industry leading breeding bull who has bred more than five 50”+ bulls like

With most of Tequila’s sons not even having reached maturity, we can expect his line to become one of the most sought-after lines in South Africa.

His dam, 32”+ O4, is also pure Zambian and is possibly one of the best cows in the Valley Venture Stud, having already produced two 50”+ bulls. Her 34”+ full sister has also produced a 50”+ bull. Her dam measures over 37” making it one of the strongest female lines in South Africa.

33 ¾ “ Platinum
Platinum was acquired in 2020 on the Stud Game Breeders auction from the well-known Lumarie Game Farm. This bull is truly picture perfect. He has all the characteristics of a “super roan” with his dark red colour, black face, wide spread and massive body.

He recently shocked us by having grown a full ½” in only a few months. With him already having worn off 1 ¼”+ off his horns that makes him over 35”. To have the genetics of a picture perfect 35”+ bull is truly a privilege.

He also has the genetics of few. His sire, 33”+ Kalahari, has already bred more than five 30”+ bulls with many surpassing 33”.

His dam is also one of the very few roan cows to have bred two 32”+ bulls with 32 ½” Diamond being Platinum’s full brother.

This magnificent bull was acquired from Jakobus Griesel in early 2020. He originates from Castle De Wild, who are famous for having the biggest golden wildebeest. They have also recently sold 33 ½” Enkulu for R1 million. Mufasa was sired by 30 ½” Admiral, one of their famous herd sires.

17 6/8”+ Big Joe – Springbuck Ram
This magnificent ram was bought from Jules Of The Karoo, who have perfected the art of Springbuck breeding over many years. This makes their bloodlines thorough bred and they carry the genes of generations of breeding. This ensures consistent breeding and it has been proven again. Big Joe has not bred a single ram under Rowland Ward (14”) and breeds 15” on average.

He was recently sold to Karoo Experience, one of the biggest springbuck breeders in South Africa and we are excited to welcome his replacement.

Karoo
Karoo was our very first sable breeding bull and he has set such high standards. He is from a very scarce Malawian line that boasts extremely thick horns and masculine bulls. He is a very prominent breeding bull. Karoo consistently breeds quality animals with ALL of his sons in the last 3 weanings measuring above their age in length, all of them already having 9″+ bases and all of them having 10″+ tips. Although his sons are still young, they prove that Karoo can breed. We are so excited to see his sons showing so much potential.

30”+ Beyers
Beyers, our first Roan breeding bull, came from the famous Gerber Boerdery. He originates from their famous Malawian lines that is also responsible for 32”
Windsor, 32” Tosca and 32”+ Blaze. He left us with amazing progeny, all having deep red colour and wide horns.

Our sable herd has some of the top genetics accumulated from some of the top breeders in the Country, their genetic combination along with our Stud Breeding bulls have resulted in the best progeny bred by Groot Sleutelfontein.

Our Copper Springbuck herd include beautiful long horned ewes and our breeding rams each measure above 15 ½ “ +, which is proven that the genetics here at Groot Sleutelfontein are clearly a step above the rest.

The Cape Mountain zebra is still currently listed as vulnerable by the ICUN. A lack of genetic diversity currently threatens the long-term survival of the
Species. We introduced the Cape Mountain Zebras to the reserve to reintroduce the species to the area. After a few months of keeping them in a separate area for them to get settled and adjusted we can now proudly say that they have been relocated to the open reserve where they have formed their own herds.

For more information or bookings: 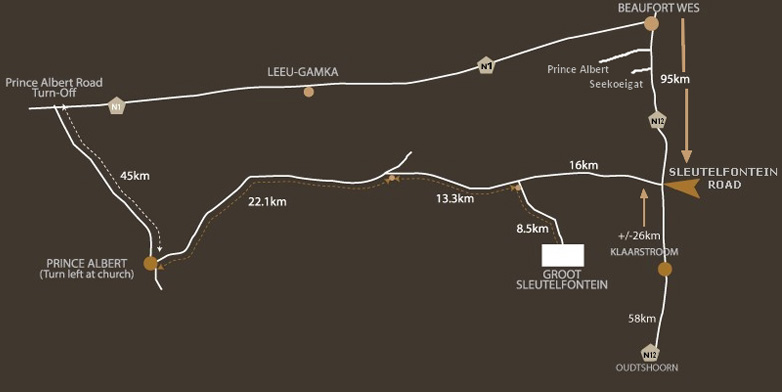